Coordinators are responsible for identifying, naming and summarizing underlying need. This can be challenging when encountering significant incidents and behavior. Those incidents can often become the focus of interaction. When this happens, it can result in confusion. In some situations, stakeholders including team members or other family members may have a hard time separating their reaction from the actual event. When that occurs bystanders will often describe how they felt rather than what actually happened. In other situations, bystanders may be challenged sorting the difference between what they want to have happen rather than what actually occurred. In still other situations, individuals may jump ahead to describing what’s wrong and who is at fault in a circumstance. The Needs Egg was designed to help Coordinators sort through all of that to build an understanding and solid hunch about what is driving the behavior that is causing concern.

The Needs Egg is designed when a Coordinator first meets a family during the Hello Stage. It is not to be completed at a team meeting. The Coordinator who should have gathered information from the youth, parents and other stakeholders should consider what they hear about the troublesome behavior and start with the section labeled 1. Beginning with when the event happened, they should move on to who was involved, where it happened and describe the actual event in behavioral terms. In one example, the situation could be described as happening last Thursday, right after lunch, in Math Class when the rest of the class had just sat down and the teacher asked him to also sit down, he looked out the window. When she approached him verbally with reminders two more times, he looked at her and started saying in a raised voice, “why are you always picking on me?”

In the next box labeled as 2, the Coordinator would describe what happened next and who was involved finally summarizing how the situation was resolved. In the example, this might include, the teacher told him to use a quiet tone of voice and he yelled it even louder. The Teacher gave him two more prompts about lowering his voice and he continued to use a raised voice tone. The Teacher finally stood up and told him to gather his books and go to the Vice Principals office. He picked up a pencil and one piece of paper, said, “fine, you’re not fair anyway” and he left the classroom, slamming the door behind him. When he got to the office he said his teacher sent him and he had to wait 15 minutes for the Vice-Principal to see him. They discussed what had happened and he agreed to stay calm in class. He returned without incident.

The next two boxes ask the Coordinator to consider a range of possibilities that would explain the underlying reasons or causes for the behavior. In the section labeled “3” the Coordinator should based their answers on what they know and what they may think about the situation. Finally, when they have completed a total of at least ten possible options, they should move to the last section and sort those answers they think are most likely true in the third section. Starting with the drop-down menu, the Coordinator should identify a range of Needs Statements that can be used at the first Child and Family Team Meeting. 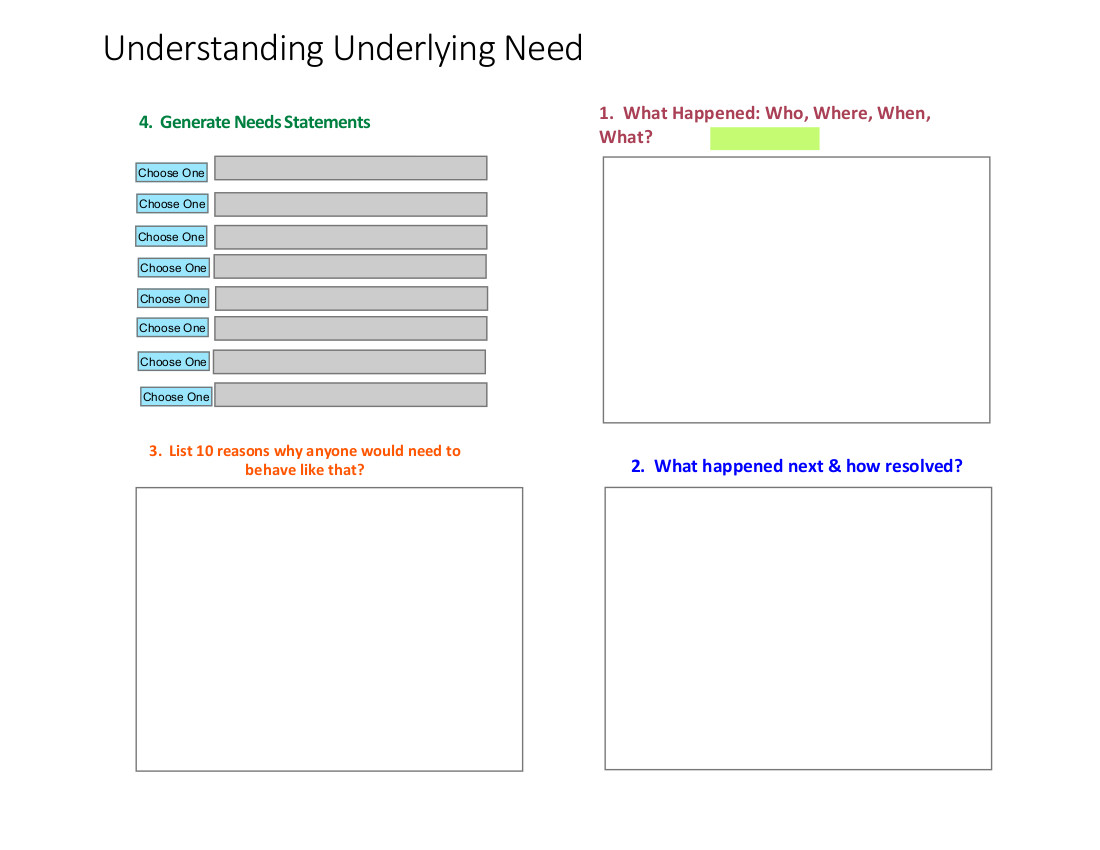